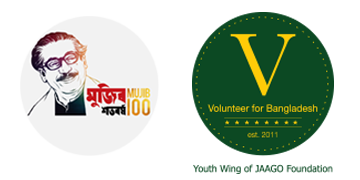 On the occasion of International Youth Day (IYD), JAAGO Foundation hosted a series of webinars on the 22nd of August 2020. Summit Corporation Limited was the key supporter of the event, whereas IPDC, Annisul Huq Foundation, SBK Foundation, Kludio, and Bongo were the webinar partners. This was a whole day program that was streamed live on JAAGO’s Facebook page. There were 6 webinars on the topics Youth in Leadership, Youth in Innovation, Youth Engagement in Policy, Youth in Crisis Management, Youth in Entrepreneurship, and Youth in Art & Culture.

Mr. Korvi Rakshand, Founder & Executive Director- JAAGO Foundation, hosted the first webinar on “Youth in Leadership”. Ms. Ambareen Reza, Co-Founder & MD, Foodpanda, Mr. Ejaj Ahmed, Founder & President of BYLC, Mr. Sudipto Mukherjee, Resident Representative-UNDP, Mr. Nahim Razzaq MP, Member of Parliament, People’s Republic of Bangladesh were the speakers at the panel. Many interesting insights came up in the discussion like how female leadership is met with a lot of challenges and how Bangladesh may be more accepting than other neighboring countries on this matter.

Ms. Ambareen opined that her content isn’t taken seriously because of her gender. ‘Let your work speak for itself. Regardless of gender, what are the individuals doing for society is what should be highlighted’. Mr. Ejaj commented that leadership is a work that needs power and the ability to take on responsibilities. Embracing diversity and living in unity. Mr. Nahim spoke about how to overcome and learn from failures. He said that the young generation needs to be familiarized with government practices and placing them with internships so that they can be more skilled to be part of social changes.

He also mentioned how the youth of the country showed immense courage by distributing relief without caring about their own safety. Mr. Sudipto emphasized on what leadership skills the youth should be involved in post-COVID and how the young people should invest more in health and particularly in mental health as a prerequisite to become a good leader.

Mr. Mominul spoke about how a lot of people have ideas but fail when it comes to execution. Hence, youth should be interfaced with proper opportunities and systematic ways to help them execute their innovative ideas. Mr. Tajdin talked about the four things that should drive youth- Purpose- lead a life with ethics and value, Courage, Passion, and Curiosity, to pursue your dreams and be an innovator. Innovation doesn’t mean disruptive innovation, it means adding value to existing innovation. Mr. Ayman added technical skills and vocational skills to be equally as important as a four-year graduate program. The webinar was hosted by Mr. Tanjim Ferdous, National Consultant, UN.

Mr. Farhad opined that engaging with Youth will help us to understand them better and communicating with them will help us to know their views and make them involved in more humanitarian causes. Ms. Nobonita talked about creating a platform for the youth so that they can make their voices heard and know the systematic way to do their work. They are faced with obstacles and barriers and we need to help them overcome those challenges regardless of their gender, religious and political views. Mr. Sayeed added that the youth need to be informed and inclusive to be democratic. Mr. Shahab said about educating the society and the community as a whole about what is right and wrong and acting accordingly. The youth need to take charge of making the changes happen as they are in the future.

On “Youth in Crisis Management”, Ms. Shaheen Anam, Executive Director, Manusher Jonno Foundation, expressed her admiration of how relentlessly the youth has participated in the distribution of relief packs and said the society should appreciate them, their work and promote their good work. Mr. Abdun Noor Tushar, Physician & Media Activist, emphasized the importance of training and equipping the youth with basic disaster management training like CPR, so that in times of need they would be more confident in their voluntary work. He also mentioned how the government can provide the infrastructure and the know-how to create a database in this regard.

Ms. Farah Kabir, Country Director, Actionaid Bangladesh, expressed her concern regarding if the seniors are ready to give the youth leadership. She opined that we need to come out of nepotism and also encourage young girls and women to come forward. Mr. Jakir Hossain, Finance Secretary, Bidyanondo Foundation, discussed how the youth are not keen on doing a lot of paperwork and they are more interested in action and result. The webinar was hosted by Mr. Tony Michael Gomes, Technical Program Director, World Vision.

On the topic “Youth in Entrepreneurship”, Ms. Siffat Sarwar, Co-Founder & COO of Shop Up, expressed being hopeful about the entrepreneurship scene of Bangladesh. She said, “ Entrepreneurship is a difficult choice for both men and women. There will be times when one will have no money and you have to accept it and move forward”. She also advised not to have any expectations from anyone because the only person who is going to support us is ourselves.

Ms. Rubaba Dawla, Founder & MD, Pulse Healthcare Services, had similar things to say. She talked about the social stigma centering women entrepreneurs and how things are changing 48% of the country’s entrepreneurs are females. Her advice was to believe in oneself and break all mental barriers and achieve success. She also expressed interest to work with JAAGO’s volunteers of VBD. Mr. Hussain Elius, Co-Founder of Pathao, advised not to join the start-up to earn money. One has to go through tremendous mental pressure. He talked about the importance of training and analytical thinking, that schools & colleges will not teach. One has to learn this by themselves from the internet and other sources. Mr. Kishwar Hashemee, Co-Founder & CEO, Kludio, also said the same thing and emphasized on the level of difficulty of the way of life of an entrepreneur and how it is a constant learning process. He said it is essential to be aggressive about the strategy to make things happen. This webinar was hosted by Mr.Tanjim Ferdous.

The last webinar of the day, titled “Youth in Art & Culture” was hosted by Mr. Tony Michael Gomes and the speakers were Mr. Rajib Samdani & Ms. Nadia Samdani, Samdani Art Foundation, Mr. Jon Kabir, Musician, Ms. Elita Karim, Singer & Journalist, and Mr. Ashfaque Nipun, Writer & Director. Mr. Samdani and Ms. Nadia collectively explained how there was no platform for the Bangladeshi fine arts to exhibit when they had started and now the Dhaka art summit has become a medium by which young artists of our country have made an impact and their work has reached the whole world.